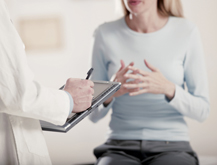 Interview with a transplant recipient regarding personal experience with skin cancer:

P.S. is a kidney transplant recipient. He received his first living related donor transplant in 1980, which he rejected. He received his second transplant (cadaveric donor) in 1982, which is still functioning to this day. At the time of receiving these kidney transplants, P.S. wasn't made aware of the risk of skin cancer while on the immunosuppressive medications required for the survival of the transplanted organ. However, 2-3 years after the second transplant P.S. experienced his first skin cancer. It was at that time that he was made aware of the fact that skin cancer is "a common occurrence" in transplant recipients. Since the time of his first skin cancer 17 years ago, P.S. has developed approximately 510 new skin cancers. This is a large number. It equates with the removal of 7-10 lesions suspicious for skin cancer at each visit to his dermatologist every 3-4 months. He has mainly experienced squamous cell carcinomas, but also a few basal cell carcinomas. In addition to the skin cancers, he has required treatment for numerous precancerous spots referred to as actinic keratoses. He has been treated with liquid nitrogen, electrodesiccation and curettage, excisions, Mohs surgery, skin grafts, lip shaves and more. He states he has required a Mohs procedure almost every time he has presented for examination over the past 7-8 years. The incidence of his developing new cancers appears stable in number at this time. P.S. was recently started on an oral medication to potentially decrease the number of new skin cancers that he develops. This medication is called acitretin and it is being investigated for its potential chemoprophylactic (cancer prevention) effects.

Why has P.S developed such a large number of skin cancers? The answer to that is multifactorial, however, sun-exposure and sun-damage do play the major role. When asked about his sun-exposure as a child, he stated that despite his Irish decent and fair skin, he was outside playing every day. There was no thought of the damage that the sun might be causing. As a result, P.S. would burn and peel repetitively, never tanning. This continued from childhood through college. He also spent a year in the military stationed in Viet Nam. Although many individuals feel that the chemicals they were possibly exposed to in this environment were harmful, P.S. believes the daily sun-exposure in this relatively topical climate, was the most detrimental to him. It resulted in him once again experiencing repetitive sunburns, leading to the accumulation of sun damage, and contributing significantly to his current skin cancer problems.

After the first skin cancer P.S.'s initial thoughts were, "They caught it, and it's not going to show up again". At that point nothing really changed for P.S. His second skin cancer occurred approximately 6 months after the first one. Five years after his second transplant he was requiring removal of multiple skin cancers every 3-4 months, and he truly realized what a problem this was going to be. He also began to realize a need to change some of his behaviors. He has been, and is an avid golfer, which lends one to a lot of sun-exposure. He began to golf early in the morning, so as to avoid the mid-day sun. He began wearing sunscreen, a broad brimmed hat, long-pants, and long sleeve shirts.

P.S. recently went to Hawaii. He was able to enjoy, but once again, did so in a "sun-smart" fashion by wearing long sleeve shirts (even when snorkeling), wearing sunscreen, wearing a broad-brimmed hat, staying out in the sun for shorter periods of time, and limiting mid-day sun-exposure.

One big issue with all health care is insurance. P.S. quickly became aware of an insurance clause referred to as "same sight surgery". Although a surgeon will charge for each skin cancer removed, even if 2-3 were removed from the same sight, like the forearm or the forehead, the insurance will only pay for 1 skin cancer removed at each sight. One needs to know their insurance plan and what to expect for billing of numerous procedures.

P.S. is an educator by profession. When asked how we could get across the message regarding potential harmful effect of sun, he recommended teaching sun protection and skin cancer prevention in the schools, in required classes such as health. Like everything else the young think, ""It won't happen to me". Individuals don't realize the sun they get now, they will pay for later in life."

P.S.'s advice to new and old transplant recipients would be to see a dermatologist on a routine basis. "Skin lesions I think are bad often aren't so bad. Areas that appear okay to me are sometimes areas of concern for being a skin cancer. As a lay person it is hard to tell for yourself which areas are skin cancer, so it is important to follow closely with a dermatologist."